I recently moved into some co-working space and I immediately had issues with the internet connection. My connection would be intermittent and would frequently drop; sometimes I had hours of uninterrupted connectivity, at other times it wouldn't last more than a few seconds without dropping completely. I had no issues with any other wifi network at home, in offices or in public.

(If you want to just see the solution that worked for me, skip down to TL;DR)

Additionally, nobody else on the network had issue but most were using macOS or Windows, whereas I was using Ubuntu Linux. After a short period looking into the router settings, we concluded that where ever the fault lay, I wouldn't be able to make any changes to the router settings, with myself being the only user having trouble. The problem clearly either was with my wireless hardware (Intel Dual Band Wireless AC 3160) or the drivers/firmware interfacing with it, iwlwifi.

Running ping would always give me one of two results, no connection whatsoever:

A search for the problem online threw up many suggestions of how to fix it, none of which worked for myself but had helped others:

The solution was to be found at the Ubuntu Forums where one user spotted the following in the output from dmesg (command to view the Linux kernel output):

The above output shows that the driver was switching between two access points (AC5 and AC11) for the network frequently, which caused the drops in connectivity.

So with the problem identified as the laptop switching frequently between two access points and so not being able to retain a stable connection for more than a few seconds, we could address the problem.

The solution was found here, which amounts to binding the network to the strongest access point.

Right-click the Network Manager icon (in Ubuntu), select Edit Connections and edit the affected Wi-Fi network. Fill in the MAC address for your access point; which can be found with:

Where <interface> is your wireless network interface name, likely wlan0, but which can be found by running iwconfig. The above command will output all the nearest wireless network access points, with each looking similar to the below:

You then need to find the cell with the highest quality signal for your network and make a note of the MAC address, entering it in the BSSID option of the Wi-Fi connection settings in NetworkManager. 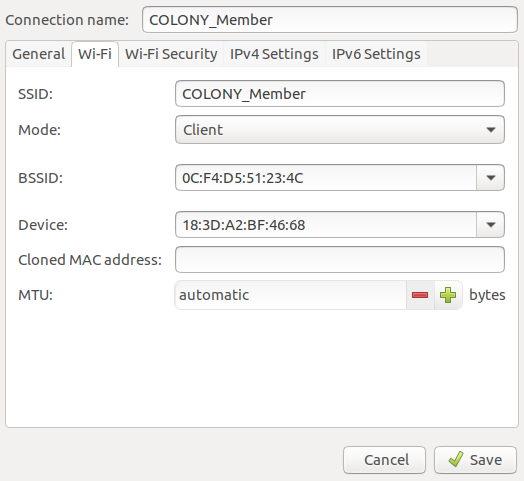 On discovering the fix above had worked, I set to work on writing a bash script that would automate the above process so that I could run it in the event that I moved closer to another access point and my connection suffered as a result.

Simply grab the script from here, save it and run the following, making it executable first:

The script will basically scan the list of nearby networks, find all access points for the supplied SSID and get the MAC address of the access point with the strongest quality signal. You will then be prompted whether you want to update the settings and set the BSSID for the connection in the NetworkManager settings.

My experience with bash is a little limited so drop me a line if you find a bug with the script.